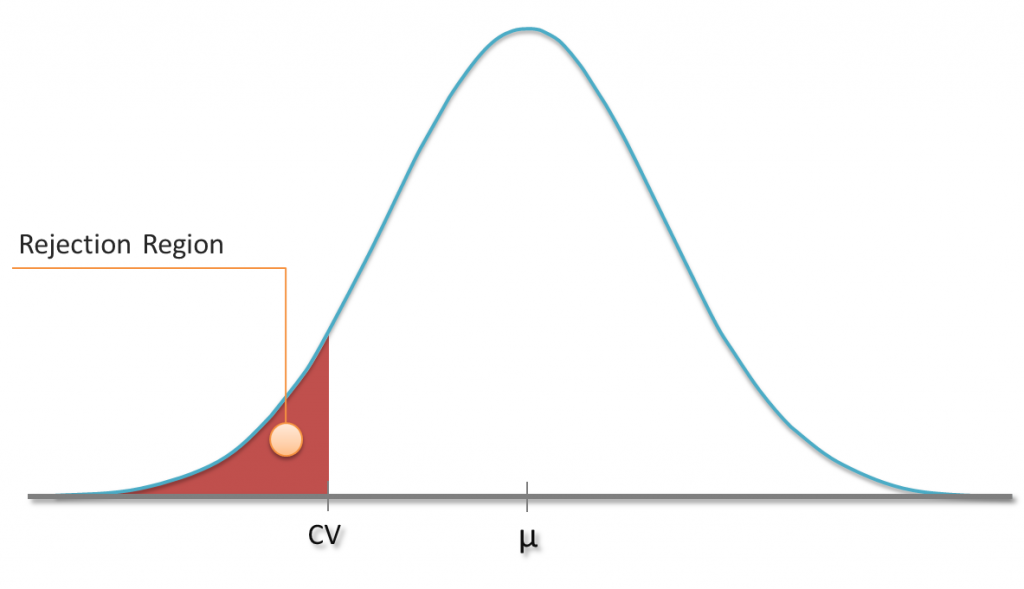 We know the chance of rejecting the hypothesis although it’s true (Type I error), because it is the chance of obtaining just one of those values from the rejection region (plotted red). But how likely are we to reject a hypothesis if it’s indeed false? In other words: How small is the type II error?

Let’s take up the example from the introduction again. We call the hypothesized mean µH and still expect the same null distribution of the sample mean in case the hypothesis was true. Also the critical value remains constant.

Power of a test: The probability of rejecting a hypothesized population mean when it’s actually not the true mean.

You can choose different values for µA and that way get a feeling how the statistical power changes with sample size, for instance. A power of 80% means a type II error of 20% and so on. The real challenge is to find a good tradeoff between type I and type II error, but this is something I won’t cover in this post.

I didn’t give any formulas, but don’t worry 😛 If you understood my explanation above, you will be able to compute most kinds of power.

As an example, you can extend the idea to obtain the power of two-sided tests. And there it just starts! Employ the principles to calculate the power of tests involving Poisson or Binomial distributions. What happens if you choose the wrong null distribution? So, does running a z-test on a small sample would have great impact on the test’s power? Calculate several scenarios for likely sample variances and and and….

There are no limits!