Say, in your local newspaper you read an article on the rate of car acqusition in your country. A study shows that car owners hold their car for four years on average. The title of the article reads “Car Acquisition: 2.5 cars in 10 years”. Is this deduction valid?

Take a look at the graphic below. It shows a simplified version of such a study invloving a population/sample of three people. You may recognize that the average time between two buys amounts to 4 years. However, the count over a ten years period is not  the presumed 10/4=2.5 but 5.4!

So take care when performing such calculations!

You have not heard of Andrews Muffins yet? Andrew is a baker and you find his most popular products in the graphic below. Since he visited some statistics courses in college, he keeps the accounts to deduce useful information. He knows that he can expect a muffin to take 2.5 minutes in production (including portions of time for pastry, baking, packaging, …) under the assumption that his product mix of “Simple Muffin”, “SmartiesⓇ Muffin” and “Cherry Muffin” lasts.

Now, to optimize his pricing model, Andrew needs to know how many Muffins he can expect to produce each hour. The equation

should lead him to the expected throughput on an hourly basis, he guesses. Are you suspicious of the solution n=24? Don’t be. 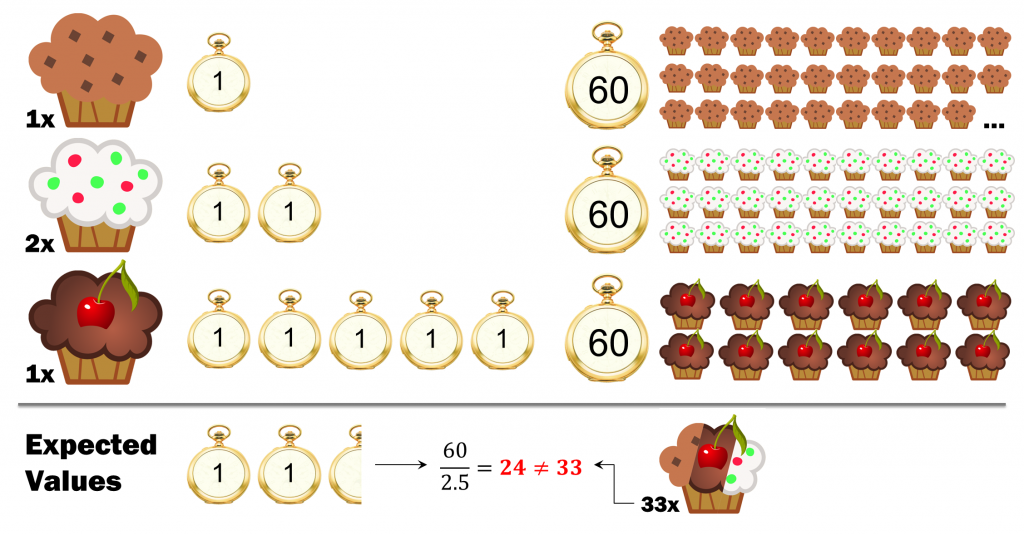 In this particular case we should indeed agree to the left-hand solution. Wonder why? Other than in the previous example (concerning car acquisition) we deal with categories of fixed proportion here. Since 30 of 60 minutes are needed for 6 “Cherry Muffins”, Andrew is only able to produce 24 muffins per hour. You recognize that it is not possible to forbid division by means and expected values in general.

However, we usually speak about uncategorized counts. Here we can state (similar to the car acquisition example) that:

Although distinguishing between being allowed to divide and being not allowed is hard enough, we didn’t take a look at combinations multiple random variables yet. The reciprocal is always involved when dividing by means or expected values since

As a consequence, you need to see that often

You may meet such problems in a variety of situations. Here are some examples.

You are going to meet more examples in your everyday lifes. Often it needs a lot of caution to spot these little but highly influential mistakes. I would enjoy reading your experiences in the comment section below!