Fossil fuels will vanish in the future – for sure! What we don’t know is the exact point in time when this is going to happen. Based on the BP Statistical Review of World Energy 2016, we find that fossil fuels will last up to 100 years. Proven oil reserves, which will last for the next 50 years, are expected. However, BP has an interest in keeping the energy reserve numbers great: Any other message would make the oil price jump up and renewable energy would become less unattractive. Especially when considering the rising demand for energy (e. g. in China) we need to prepare for earlier shortages. But what does it take to substitute fossil energy sources by renewable ones? 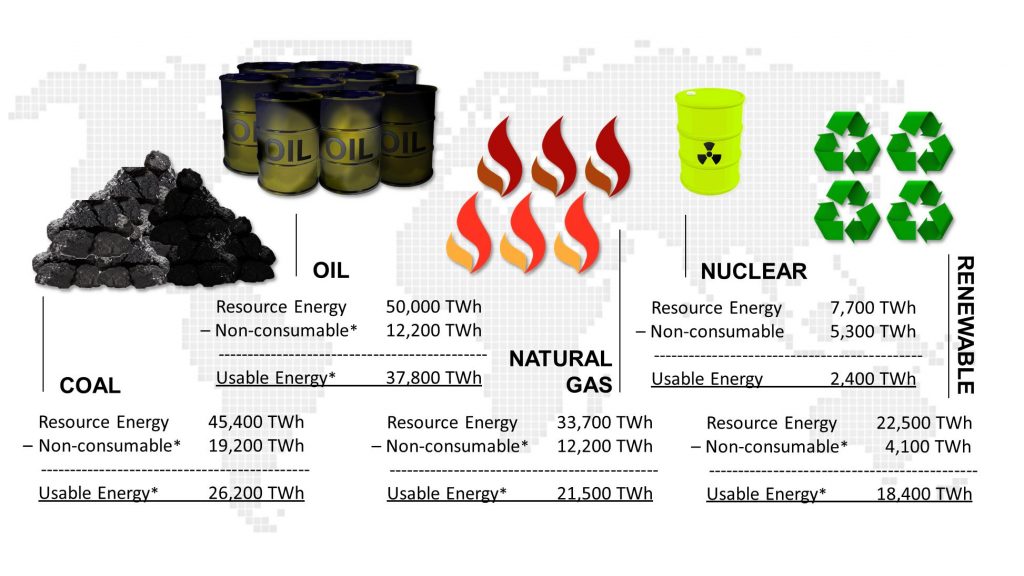 World energy consumption in 2014 mainly adopted from the simplified energy balance sheet table of the IEA; an asterisk (*) indicates that the data was not fine-grained enough to guarantee full accuracy [1][2]

Not only do the numbers reflect an incredible thirst for energy, but it also shows to which extent we damage earth by exploiting these resources. The bottom line is that this energy supply from coal, oil, natural gas and nuclear energy (~107,000 TWh) must be substituted. What are the options?

Supply the required amount of energy

There are several ways to obtain the required energy capacity. Our greatest source of renewable energy is the sun. That is why we put the focus on solar energy here. Below you find some calculations which demonstrate the mammoth task of substituting fossil fuels.

Of all the forms of solar power, the most popular one might be photovoltaics. Annual solar irradiation in Southern Europe ranges between 1000 kW/m² and about 1900 kW/m² while in Africa, the Middle East and other regions average values of more than 2700 kW/m² are observed.[3] Photovoltaic cells have reached 44.4% efficiency in 2013, but effordable photovoltaic cells generate power at an efficiency rate of ca. 15-20%.[4] At an (optimistic) efficiency rate of 20%, solar cells in a sunny area of 59,444 km² have to be built in order to replace fossil fuels. That’s a square with a side length of 244 km! To replace oil only, the side length reduces to still 145 km.

Concentrating Solar Power (CSP) on the other hand, is usually much cheaper to build than photovoltaic power stations. Like a steam engine, energy is produced from thermal effects. Efficiency ranges at 15-25%[5] and is therefore comparable to that of photovoltaic energy generation but, due to simpler materials used, it is not as expensive. It is important to note that CSP requires cooling at a rate of ca. 3000 l/MWh[6], which makes it a cheap energy source in hot coast-near regions like California, Morocco or South Africa (where high temperatures would heavily shrink a photovoltaic cell’s efficiency). What has been calculated for photovoltaic cells before, accounts here as well: Approximately 60,000 km² area of CSP power stations are required to replace all fossil fuels and more than 21,000 km² are required to replace oil.

For wind power there is no such neat calculation which we can perform. In 2012, 543 TWh were produced from wind power.[7] That is, wind energy capacity needs to become the 200-fold of what we see today in order to substitute fossil fuels in the world. Also we would need capacity of factor 70 in order to replace energy from oil. People who have seen wind farms in the USA, Spain or Germany may agree that building so many wind power plants seems fairly unbelievable.

Of course, there are more sources of renewable energy. For instance, energy from hydro power accounted for almost 4,000 TWh in 2014.[8] Further there are biofuels and waste, geothermal energy, solar thermal energy, tidal power and so on… It is important to emphasize that a mixture of all these renewable energy sources leads to success, because they complement each other. That is, non-solar energy may come in handy as a basic energy supply at night for example.

However, there will be times when the mixture of energy sources cannot supply all the necessary energy. This could occur e. g. in the evening hours when people get home and consume energy for cooking, lighting and entertainment. Without sun, a gap between supply and demand will arise. It follows that short-term (minutes) and long-term (hours) energy storage need to become built up. Besides various forms of battery storage, pumped storage hydro-electricity like the Lewiston Pump-Generating Plant, molten salt energy storage (especially in combination with CSPs) and others will be important ingredients of the energy concept.

Not less important is energy management and this is the reason why smart grids become popular. They are networks which balance supply and demand between lots of power plants, storages, industry and homes. Homes are of interest since they might also act as energy producers (e. g. solar panels on the roof) and energy storages. Dynamic pricing is an essential feature in order to reduce demand for energy when supply is low. People should be forced to consume or store energy when it is available instead. Scaling up this idea, we obtain a global energy transmission network. When it is night in Europe and Africa, energy from non-solar energy sources can be exchanged within the region and also powerful future energy exporters like India might be able to support. The day then transforms Africa to one of the greatest power producers in the world, which is able to power vast parts of Europe, Asia and America. The sketch below is very simple as it only takes into account the discussed forms of renewable energy. Also the wide variety of energy storages is reduced to a battery symbol and the map ignores geographic characteristics (e. g. mountains). However, the main idea should be clear. 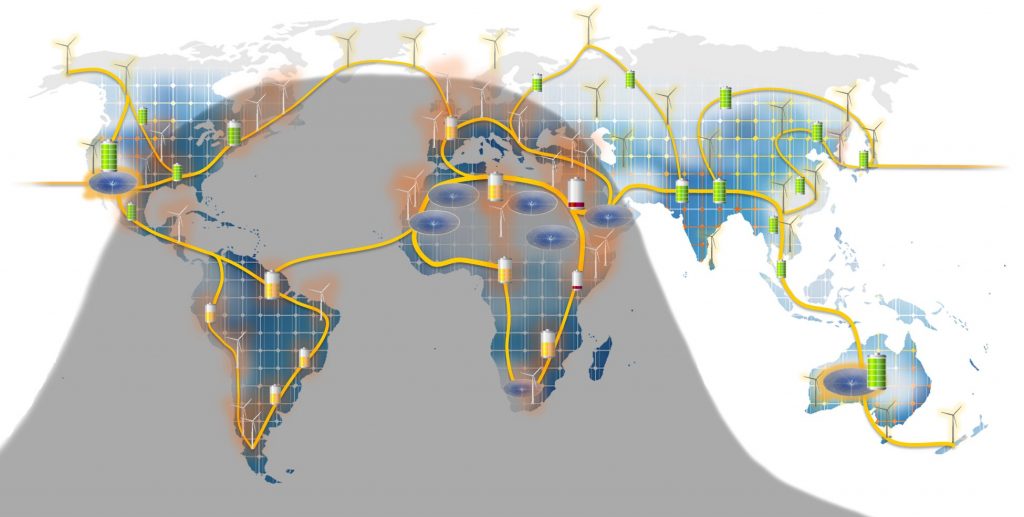 Last but not least, the ingredient economicalness will help to reduce the global demand for energy. Building passive houses helps to reduce energy effort for heating and cooling, for instance. Charging your e-car should be done when supply exceeds demand; e. g. noon (when supply is high) or midnight (when demand is low). Don’t waste energy: It is definitely not appropriate to drive 10 miles on the highway just to buy a single donut.

Changes to your lives

The impact on your personal lives will include the fact that you drive in an e-car or on an e-bike to work. Maybe you will do this on a solar road as it is possible today already.[9] At least you will observe growing solar plants and wind nozzles in the landscape. You will find that costs for energy will rise (depending on the quickness of building up renewable resources) and you might always have a look at the real time energy pricing before you turn on the TV.

But just like your personal lives, the shift towards renewable energies will influence the equilibrium of political and economical power in the world. Depending on how things turn out in a political manner, Africa will profit from making money by exporting electricity to the world. India may become one of the leading solar energy providers to Asia and therefore will not only drive their own growth. On the other hand, it will become hard for the United States to go on with an energy demand which accounted for 18% of the world-wide consumption in 2013.[10] Also the benefits of the petro dollar system are so essential to the US that they will not give away these benfits without struggle.

After all what we have seen, it seems as if substituting fossil fuels by regenerative energy  is feasible. However, this job is a really hard one and we should start working on it right now. Some countries, like Germany, committed to the change already. Innovations regarding efficiency of energy conversion and storing are going to support them on their way. If you want to bring the importance of the topic into your friend’s focus then share this article!