Home » Mathematics » Integration by Substitution – Why it works!

Integration by Substitution – Why it works!

Integration by substitution (often referred to as u-substitution) is quite hard to understand. Most people just follow their proven recipe when performing this kind of integration. In contrast to that doing, I want to illustrate why the steps of u-integration are necessary. Therefore we will develop the idea slowly by giving simple examples which illustrate what works and what doesn’t.

What integration by substitution gives you

Say, you wanted to tackle an integral like the following:

You cannot integrate because the radical prevents you from doing so: Neither are you able to integrate the whole product nor does rearranging the term helps you. With

however the term in the radical disappears. So substitue

. Now you have to deal with the expression

This is obviously easy to integrate. We obtain the solution

in which we can substitute back

to receive the solution of the integral from the beginning of the section:

Take a look at the following picture. It clearly shows how substituting shifted the graph horizontally. 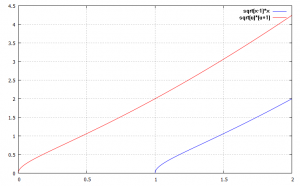 Comparing the original to the substituted function

As you already have guessed, the integrals of both functions are identical. They only differ in location, but we fixed this by substituting backwars in the end. However, this procedure of simply replacing a term does not work always! (see next section)

Actually we omitted the substitution of

up to this point. Instead we just replaced

which is inaccurate and works only in some special cases of integration by substitution. Let’s consider another example and try to integrate

. By the inverse chain rule, it is obvious that

But making use of the substitution

which will not lead to the desired result. So what is the probleme, here? If you have a look into the picture below then you will agree that the shape of the function is changed by substitution. The original function is much more bent upwards than the substituted version. When comparing the function values for

respectively, you observe that the range

is compressed to a much smaller range of

while the substituted function is horizontally spread out compared to the original graph. This is also reflected in the density bar. 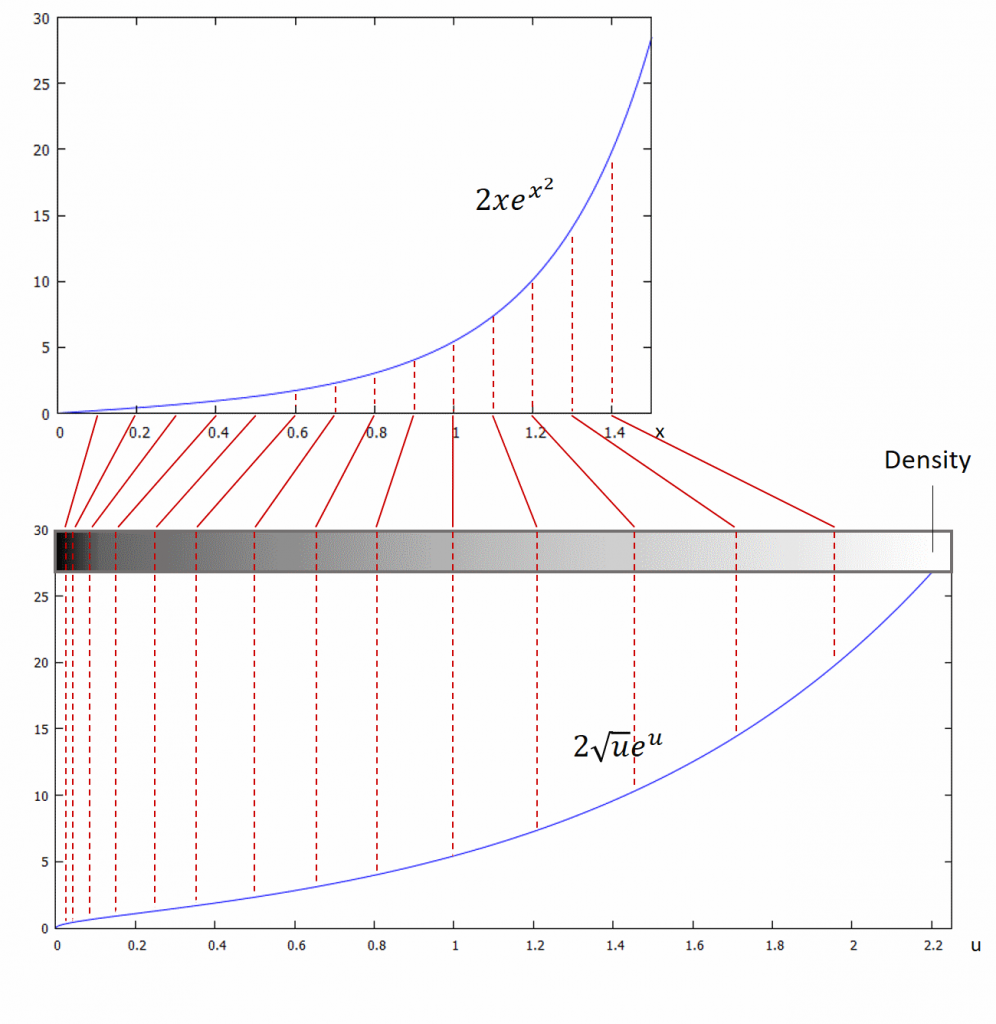 How transformation affects the shape of a function

Of course, different shapes lead to different areas below the functions’ graphs. To overcome this issue, we need to rectify the bottom graph’s integral. That is, for each slice at a low value of

we need to “virtually add” some area below the graph and vice versa. The approach is to multiply by the density

which is high if

and the other way around. Hence,

Note that most people would use the following inaccurate (but very handy) mnemonic to directly substitute dx:

Or if it is easier in your case, you can differentiate

and then substitute for

Integration by substitution often doesn’t work solely. I will show you an example which will involve integration by parts as well. Further, the example will illustrate how to work with limits directly instead of performing backwards-substitution in the end. Here we go!

to transform the limits and its inverse

to transform the integrand.

Integration by parts comes in here:

to obtain the indefinite integral:

I hope you now agree that integration by substitution (alias u-substitution) is an easy, logical and helpful thing 🙂